The tulips are up in the white garden. They bloomed just in time for the garden tour last Saturday. The tulips take all the attention, but the edibles are thriving in the white garden too. If you didn’t notice them in the first picture, you’re not alone. My garden tour attendees didn’t see them at first, either, which also means they’re not immediately noticeable to my neighbors. The flowers steal the show, and unless you’re looking for them, you won’t see the edibles, which is just the way I planned it. The Katy apricot has fruit on it already. This tree ripens 3-4 weeks before my Royal apricot, which means we’ll have fresh apricots twice. I specifically sought out this tree, not knowing what it was called, but knowing that it had fewer chilling hours than my Royal. My father-in-law’s tree is always ripe 3-4 weeks before ours, so I figured out what would be ripe then, and went to a different nursery that carried this particular tree. Near the Katy apricot is this Swiss chard plant. Iris are coming up in front of it. The grass-looking wisps near it are leeks. Just out of view of the picture to the left is a bush variety of zucchini.
I’ll plant basil in place of the iris when they’re done blooming. In the upper planter behind the bench are mache, spinach, tarragon, oregano, and my new Meyer lemon tree. Behind the lemon tree I added some garlic chives this year. A single daffodil is up here, but others are starting to come up in this area. When the mache and spinach are harvested, Armenian cucumbers will take their place. I planted seeds for them this week in the garden. I planted two thyme plants between the roses. While the roses are edible, rose-petal jelly is prettiest with pink or red flowers, so I will be leaving these roses as landscape roses. They are a floribunda rose, so they will bloom every 2-3 weeks until frost. They’re just about ready to bloom for the first time this year. Next to the driveway is this planter. Eventually the bushes will grow larger and be pruned into ball shapes. The yellow flowers are the decorative white kale that are bolting. They grow well here from October to early spring. It’s time for me to pull them. Between the bushes are daffodils; one has come up here as well. To the left of the daffodils is a red looseleaf lettuce, and to the left of that is parsley, which is still rather small. I’d like to stop buying dried parsley, so I have been planting it all over in order to have enough. I’ve realized that I would like to use a lot more than I have in the past, which is also incentive to grow more.
The lettuce will be replaced by basil when it gets hotter; I planted basil seeds to the right of the dripline. I usually don’t plant basil until April, but everything bloomed here a month early and it is plenty warm enough for the basil seeds to germinate.
In the same planter, to the right of the daffodils, is a different red leafed lettuce, and then I have some white alpine strawberries that have just germinated. To the right of that, lining the walkway, are white violas (these are edible if you like edible flowers on things). The violas are tiny, and it will be a month or two before they bloom, as I am growing them from seed. Violas can be planted as plants in October here and grow all winter, but seeds were more cost effective. I may try seeding indoors in mid-summer for fall plants this year. Closer to the front door there isn’t as much direct sun. In this area, I have primroses planted in front of parsley. When they primroses fade, the parsley will fill this space. The vine in the center of the picture is a passionfruit vine. I don’t know how it will do in this space, but it as it grows it will reach sun further up the wall.

Not photographed are the peach and lime trees, nor the chamomile that is starting to come up.

The next flowers to bloom should be the Star of Bethlehem, daffodils, ranunculus, and roses. I’m looking forward to them! 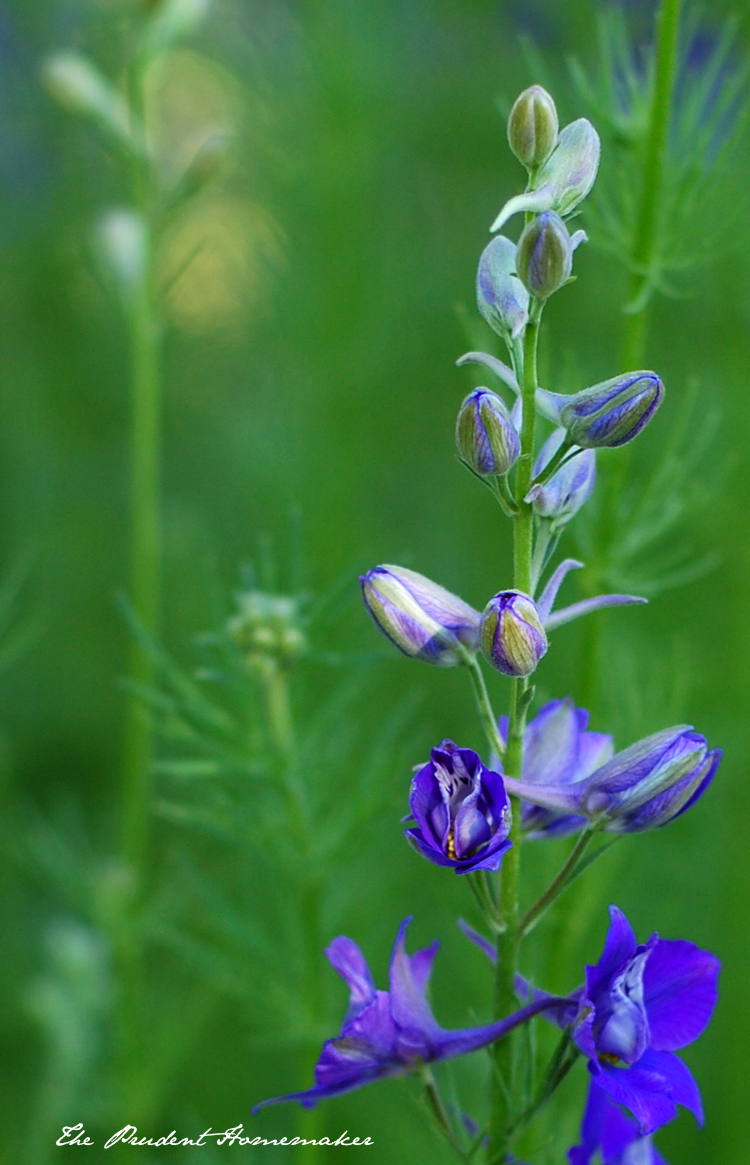 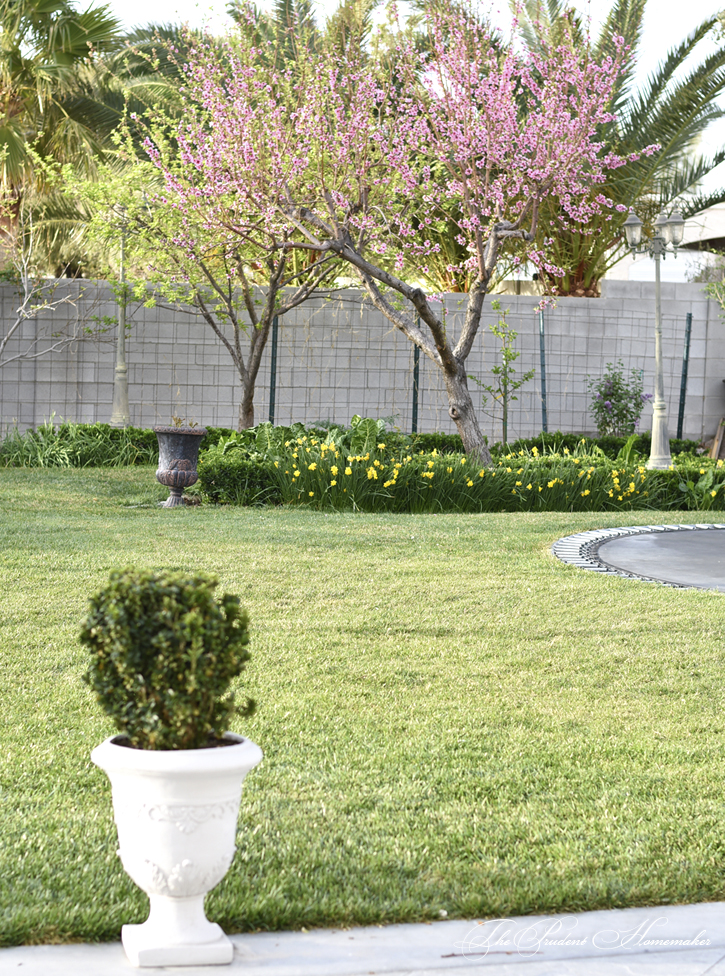 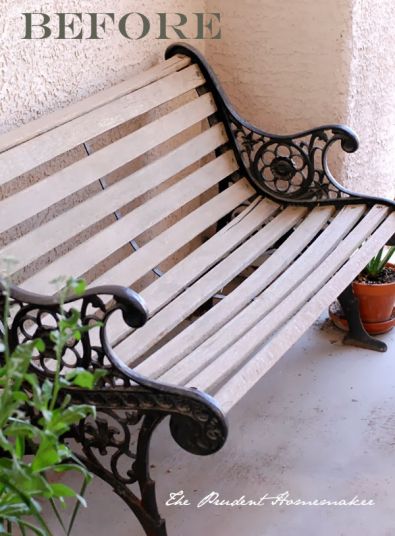 When you get married, you each bring certain items with you. One of the things my husband brought was this bench. It was old and worn even then. Somewhere in our second year of marriage I repainted the metal ends and did a slight sanding to the slats, but it still looked pretty similar…. 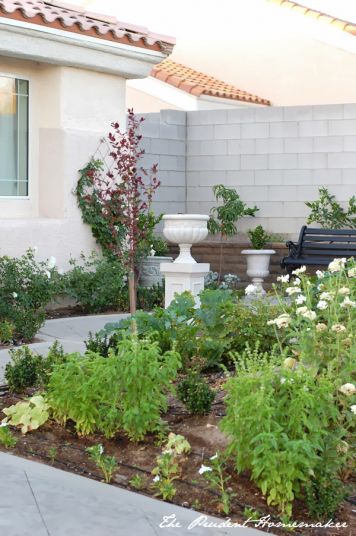 Here’s a reminder of how it looked before (for the last seven years, and the three years before we owned it): And now, right before sunrise: Can you see the edible plants? No? Good. Most of my neighbors don’t, either. I’ll point them out in more pictures. Another great change is that we went from one… 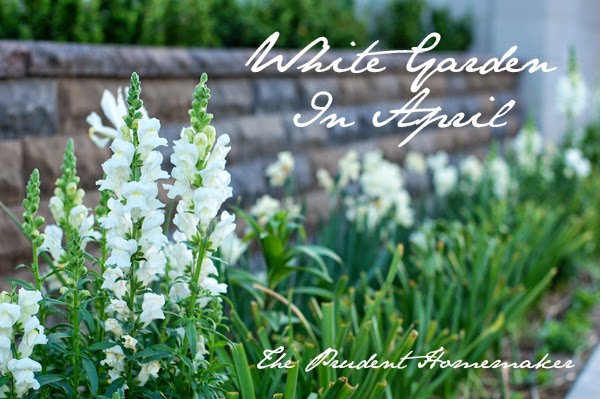