I thought I’d share with you the gifts that I made Liberty for her birthday. I made her this necklace and this bracelet.

I bought the pink beads many months ago at Michael’s when they had a 40% off bead sale. This was one of the least expensive stings of beads.

The chain and 2 jump rings were purchased on Etsy last year when I was buying supplies for Christmas gifts. I bought several chains at once from this seller.

The silver beads (both sizes) were part of a lot of beads that I bought last October at a garage sale.

The wire between the beads on the necklace was from a little kit that I purchased at Walmart for $2 last year for Christmas gifts; each piece was .04 and after I cut it I saved the other half and used it to make another necklace for Winter in green, making each piece .02. It would have been even less if I had used wire and just bent it. (My needle-nosed pliers and wire cutter are ones I picked up at a garage sale last year for $1 each).

I’ve had the elastic that I used for the bracelet for many years. The change purse was made from an old pillowcase that belonged to my grandmother for the outside. The lining is from the back side of a pillow sham that I bought at a garage sale last October (I used it again in another gift further down; it is another rose print, with smaller roses. I just wanted the quilt but it came with shams so I cut up the back side of one. The zipper is one that my grandmother had in her stash; I sewed it shorter and cut off the excess to make it the right length. This bobby pin rose was a quick project. The bobby pin was purchased on Etsy last year for Christmas from the same seller. I attached it to the bobby pin with E-6000 glue (I bought a tube of E-6000 glue on Amazon last year). The embroidery thread was some that I purchased on sale last year. The fabric came from the daughter of a friend of my mom’s. She gave me a lot of it, as you’ll see further down. Liberty wanted a sewing kit. I made her this one by tracing an actual envelope and adding a seam allowance. I hand embroidered her name after tracing it onto the fabric using a font on my computer. I sewed the address lines on the sewing machine. The stamp was cut with pinking shear and sewn from the same fabric as I used for the lining of the change purse and the lining of the sewing kit. The back is closed with a button; I hand-embroidered a rose in the buttonhole. The lining for the sewing kit was made with the other side of the back of the pillow sham that I mentioned earlier. I actually made this gift at Christmas but I didn’t finish it in time, so I finished it for her birthday.
I made the outside with unbleached muslin that my grandmother had, and I embroidered her
name on the front of the envelope. I purchased the batting last year at Joann’s on a deep discount on Black Friday. The seam ripper was  part of a huge sale at Wawak last year on Black Friday; I ordered the scissors then as well. The dress was made with the pink and white gingham that I mentioned earlier. It’s polyester and is very thin, so I lined the dress with  poly/cotton broadcloth from my grandmother’s stash. The buttons were ones from my button jar. The collar was made with fabric that a reader’s daughter sent to me (it was leftover scraps from a dress shirt factory; I sewed a purse and some wedding dress hangers for the daughter’s wedding, made from the reader’s [her mother’s] wedding dress; you can see a picture of those on my facebook page). I made a flower to put on a ribbon belt; the ribbon was purchased by the spool on sale several years ago; I sewed loops on each side of the dress with pearl cotton to help keep the ribbon on while she is wearing it (I’ll take the belt off for washing). The total cost for these gifts was $15 (the scissors were $8.95), and none of it was spent this year, which was also a blessing to me at this time.

I made her a cake from scratch and we used things we already had to decorate for her birthday, including the fabric banner that I made several years ago.

I took her on a bicycle ride first thing in the morning on her birthday. She loved it.

This post is linked to Fabulously Creative Friday, Frugal Friday at The Shabby Nest, Inspiration Monday at I Should Be Mopping the Floor, Motivate Me Monday, Craft-o-Maniac Monday, Make It Wear It.

I worked in the garden a lot last week, filling trash cans with overgrown branches and vines. After filling 5 trash cans I still haven’t made much of a dent in the garden, so this week I plan to do a lot more pruning. I also need to finish mixing manure in the beds and get… 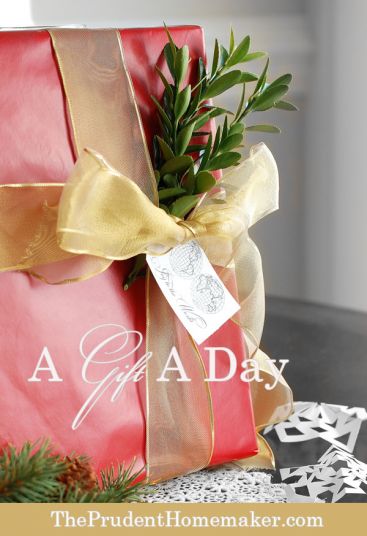 In the upcoming months, I will be sewing gifts and clothing. Winter has a birthday right before Christmas, so I will not only be making Christmas gifts in the upcoming weeks, but I will also be making birthday gifts for Winter, as well as clothing for Winter. Yes, that’s a lot of sewing from now…