Ever since we’ve had the tree up, I start my morning by taking Ivory (who wakes me early in the morning; I nurse her and then she’s up after that around 4:50 am on average; sometimes earlier) into the living room, and turning on the Christmas lights. I love watching the delight on her face each morning.
Now for this week’s frugal accomplishments:
I made Christmas gifts. I wrapped gifts with paper I bought on clearance several years ago, and vintage curling ribbon that my mom gave me (some was from the 70’s, and some was much older than that!).

I cut the buttons off of a worn dress and added them to my button jar.

We watched a movie and a tv show for free on Hulu.

The only food I purchased this week was a can of olives, which was free after a coupon. I also used a coupon to get a free container of dental floss. Both were internet printable coupons.

I picked up my free 5 x 7 print that I ordered last week at Walgreen’s.

A friend offered us her son’s outgrown bicycle. It needs a little grease on the chain, some air in the the tires, and some cleaning up (it is rusty in a few spots) but I think my older son will enjoy it!

My mom’s friend’s daughter changed to a gluten-free diet. She offered me some things that she could no longer eat, including a couple of buckets of oats.

She also had some food-grade diatomaceous earth that she no longer wanted. I hope it will help me get rid of the bug problem in the garden! The mild winter last year meant an abundance of bugs, which ate my garden down to very little. Diatomaceous earth can also be mixed with water and sprayed on your trees when they are dormant, to kill overwintering bugs. I may try this out instead of or in addition to the organic dormant oil that I usually use in January.

I rolled up towels to put inside the house in front of my front door. It stopped the draft the blows through there in winter. I had been planing to make a door snake for several years, but I’ve never had the time. This solution took 30 seconds, and will be fine for the next couple of months until it’s warm again.

I saved seeds from the basil in my garden.

My daughter received a free knitting lesson from my grandmother’s neighbor. 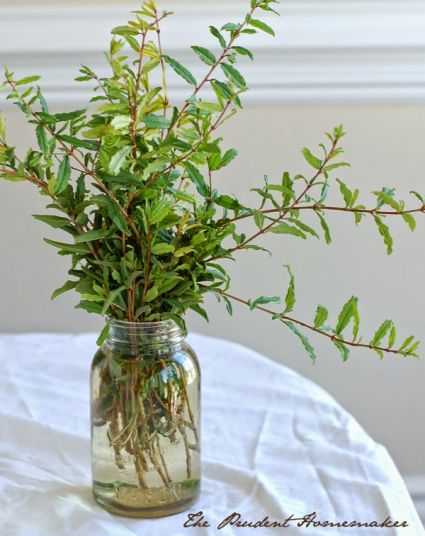 I cut branches from the garden to decorate the house. Two of the boys’ posters showed up, and one was rolled in brown paper. I saved the brown paper for other projects/wrapping presents. The Amazon gift card that I ordered from Swagbucks came, and I was able to order one more poster for the boys’…

I cut a few plum branches from the garden to add to the branches I had cut the week before, and made an arrangement for our table.  I set out tomato plants in the garden this week. I decided to purchase the larger plants this year, with hopes of an earlier harvest (before it gets… I cut zinnias, iceberg roses, and rose hips from my garden. I gave all 5 girls haircuts this week. Everyone but Winter asked me to bob their hair, so it seems 4 out of 5 girls prefer bobbed hair. I used a coupon code to order twenty-five 4 x 6 prints for free at Walgreen’s. I…